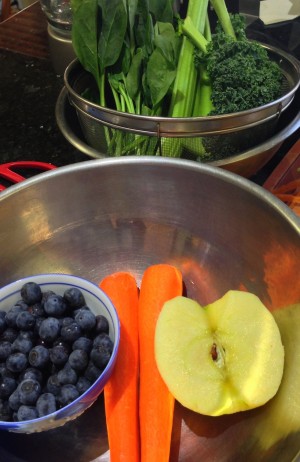 – Mark shares his personal story about making and consuming 2 liters or more per day of green drink for 365 consecutive days, about 750 liters total. He talks about buying organic or spray-free fresh produce at the farmers market and about the juicing process using his Omega Juicer and Vitamix. As a cyclist, Mark may ride 60 miles in a day around the Los Angeles area, at a full speed of 19-21 MPH. Drinking the green drink beforehand gives him energy for these rides and for long hikes. He talks about his commitment to trying the green drink, which began when Adele asked him for some recipes to include in a book about walking for exercise. He started with 20 days, which he logged in a diary, then increased his goal to 30 days, then to one year, without missing a single day of green drink. In fact, Mark says he juices more than he showers (although he claims that he does shower on a regular basis!). When Adele asks him what he puts in his green drink, Mark explains that he uses mostly vegetables (kale, cucumbers, beets, carrots, and whatever is available), some fruit (for instance, fresh pineapple, apples, blueberries), and no ice or water. He cautions anyone thinking about trying to do this to start with “baby steps,” because he himself did not start slow and he thought at first that he might have overdone it to the point where his system wasn’t going to be able to handle it. All turned out well, though, and he is healthy, happy, and very fit after 365 days. Adele reiterates that anyone thinking of making extreme changes to their diet should always check with their doctor first. Mark talks a little about how his palate and diet have changed. His weekend diet is mostly raw vegan, although he eats chicken and turkey on other days of the week. He recounts a recent trip up to San Rafael to photograph a friend’s family’s wedding, and how he transported the green drink for traveling, and was so full, and was enjoying photographing the special day so much, that he barely had an appetite for dinner and breakfast. Mark talks about how now he enjoys salad greens without salad dressing, and that he is losing his taste for cooked food, something he is not necessarily happy about. He doesn’t go out to eat as much, but he does not intend to live his life just drinking green drink without eating other foods. Adele asks about the difference between juicing and blending, and Mark explains that his green drink is “like water” and not like a smoothie, because he juices the vegetables and discards the pulp, using as much as he can for compost in the yard.

Mark refers to an experience related to the green drink, that he is unable to talk about in a recording without breaking up, so he shares it here in the notes:

“Committing to drinking green drink for a year was something I did not want to share during the 365 days of the process. The only time that I wanted to share this experience was when I came across someone who I realized needed help and I felt that this information would help them along the way. This was my only exception. And believe me… I came across that road once in the supermarket, when I was able to share this information and put a smile on someone’s face. To me, it may have helped in saving a life. A lady in the vegetable section in the supermarket was was standing there, not knowing what to do. She was just watching me fill my cart with produce. When she approached me, she told me why she was there. She was sent by her husband who had just been diagnosed with colon cancer. She was told to go to the market to buy vegetables for him so he could start converting to a veggie diet. I immediately shared with her everything that I had learned up to that date about green drink. She walked away with a huge smile that she didn’t have when I first came across her path. For me personally, it was the best feeling I had ever had.”